The Pursuit of Happiness: A Tribute to America on the Fourth of July

As I have been pondering the blessings of liberty that God has granted to this great nation, and the purposes of those blessings, a specific perspective on patriotism impressed itself upon my mind. In Shakespeare's King Henry the Eighth, Cardinal Wolsey lamented his loss of power and possessions:

Had I but served my God with half the zeal
I served my king, He would not in mine age
Have left me naked to mine enemies.
(King Henry the Eighth, Act 3, Scene 2, lines 456-458)

I am also reminded of many examples in holy writ when the Lord delivered those who put their trust in Him, whereas those who relied on their own strength, placing confidence in the arm of the flesh, in wealth or in armies, were sorely disappointed. 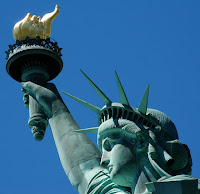 Patriotism may be a virtue, but any virtue taken to an extreme can quickly become a vice. I am perhaps more distrustful of vehement Anti-Americanism or American self-loathing than I am of well-meaning but overbearing patriotism, but I am persuaded that both extremes are destructive.  On this Independence day, when we celebrate the blessings of liberty and the privileges that we enjoy as citizens of the United States of America, perhaps it is fitting and proper that we remember where these blessings come from, and for what purpose they were granted.

I do not claim to fully understand God's purposes in establishing the United States of America as a free nation, but it is clear to me that, whether we choose to acknowledge it or not, God is the source of all blessings.  The blessings of liberty and the privilege to worship God according to the dictates of our own conscience are certainly among the greatest gifts that God has bestowed.  Many have given the ultimate sacrifice to preserve these blessings and privileges, but even these are only a reflection of the Eternal Sacrifice made by the Savior Jesus Christ.

One of the best summaries of the history of America that I know of was given by Elder Jeffrey R. Holland a few months before I was born.  I highly recommend this short tribute to the United States of America because it reveals not only the source of the aforementioned blessings, but also the purposes for which those blessings were given.  In this tribute, Elder Holland quotes the young Marquis de Lafayette who understood that... "the welfare of America is closely bound up with the welfare of all mankind".  (For those interested in the topic patriotism, I also recommend a speech given at BYU by Elder Alexander B. Morrison entitled God in History, Elder Maxwell's freedom festival speech from 1993, and Elder Oak's 1992 talk The Divinely Inspired Constitution). 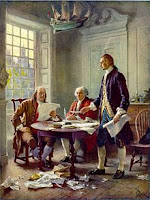 B.H. Roberts also understood and taught about the destiny of America. In a speech delivered in the Salt Lake Tabernacle in 1932, Roberts asked the penetrating question: "Do we have any right to be pessimistic in relation to America...?" His speech answers this question with a resounding "No". In spite of negative views in the media, and in spite of corruption, wars, violence, calamities, disaster and a seemingly endless array of problems, America will not fail.

One of the oft repeated maxims of the Book of Mormon is that as long as the people will keep the commandments of God they shall prosper in the land.  I am grateful for soldiers who fight to defend our freedoms, and for veterans who have fought.  I am grateful to those who have given their lives to preserve freedom, and to the founders of this country.  I am grateful for this day in which to celebrate independence and freedom. Most of all, I am grateful to Heavenly Father, the true author of liberty.

"What do we mean by patriotism in the context of our times? ... A patriotism that puts country ahead of self; a patriotism which is not short, frenzied outbursts of emotion, but the tranquil and steady dedication of a lifetime." - Adlai Stevenson20
Posted by John Hancock at 1:55 PM