A couple of days ago a friend and I attended a performance of The Nutcracker at the Covey Arts Center by the Utah Regional Ballet.  It is difficult to believe that the original production in 1892 was not a success, considering the subsequent popularity of this two act ballet.  Interestingly, Tchaikovsky composed part of the music for the ballet from Rouen, France, even though it was first performed in St. Petersburg Russia.

The original libretto was based on E.T.A. Hoffman's story The Nutcracker and the Mouse King, and the dancing was choreographed by Marius Pepita.  I thoroughly enjoyed the performance at the Covey Arts Center.  The entire production, music, dancing, choreography, set, design, customs and all, was inspired and inspiring. 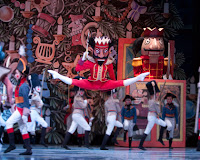 Act I of the Nutcracker opens with a Christmas party hosted by Dr. Stahlbaum, his wife and his two children at their home in Nuremberg Germany in 1850.  The mysterious Herr Drosselmeyer bestows gifts upon the children, including a toy nutcracker for Dr. Stahlbaum's daughter Clara (who, by the way, was a very talented little dancer).  After the children have gone to bed, and the clock strikes midnight, the magic begins.  In a battle between the mice and the soldiers, Clara saves the Nutcracker who in turn heroically defeats the Mouse King, which victory transforms him from an ugly toy into a handsome prince.  The Nutcracker Prince then takes Clara on a journey through the Land of Snow, and a magical snowflake carries her off to the Land of the Sugarplum fairy, where, in Act II, she is entertained and honored by the Fairy and the Prince.

When Clara awakes, she believes that it had all just been a dream.  The Nutcracker doll is under the tree, but she also finds her crown beside her, causing her to wonder, was it really just a dream?

This performance of the Nutcracker was as edifying as it was inspiring.  The dancing was superb, and the music sublime.  It caused me to reflect on a speech that was given by Elder Boyd K. Packer shortly before I was born entitled The Arts and the Spirit of the Lord, in which he stated that "The greatest poems are not yet written, nor the paintings finished. The greatest hymns and anthems of the Restoration are yet to be composed. The sublimest renditions of them are yet to be conducted."

Elder Packer went on to say that "the greatest hymns and anthems have not been composed, nor have the greatest illustrations been set down, nor the poems written, nor the paintings finished. When they are produced, who will produce them? Will it be the most talented and the most highly trained among us? I rather think it will not. They will be produced by those who are the most inspired among us. Inspiration can come to those whose talents are barely adequate, and their contribution will be felt for generations; and the Church and kingdom of God will move forward just a little more easily because they have been here."

Ideally talent and preparation combined with inspiration will produce works that will glorify God and thrill and delight audiences as much as, or even more than, the Utah Regional Ballet's production of The Nutcracker.
Posted by John Hancock at 3:35 PM