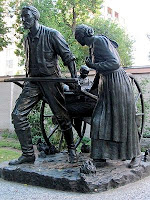 What is a pioneer? A pioneer is one who goes before, showing others the way. There are many pioneers to whom I look for inspiration, including my parents, my ancestors, and the Mormon pioneers who crossed the plains. There are pioneers of ancient days, and pioneers of modern times. There are pioneers of the future, such as little children and those yet to born. As I consider the sacrifices and the accomplishments of past, present and future pioneers, there are three pioneers in particular whose lives I wish to acknowledge and commemorate.

Abraham was an early pioneer who was rescued from very unfavorable circumstances in Chaldea and led through foreign lands with his wife Sarai, from Haran to Canaan and eventually into Egypt. This great patriarch, a father of many nations, a prince of peace, and a high priest, was also called a Friend of God. As if his earlier journeys were not enough to endow him with pioneer status, Abraham made yet another trek in his old age, bringing with him his precious son. He arose early one morning, laid wood for an offering upon his son Isaac, and together they journeyed to the land of Moriah to offer sacrifice. As a result of Abraham's willing obedience, he paved the way for all the nations of the earth to be blessed. 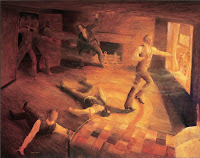 Joseph Smith, like Abraham, was a friend of God. His path took him from the town of Sharon, Windsor County, in Vermont, through Palmyra, to such places as Pennsylvania, Ohio, Missouri, and Illinois. He lived great and died great in the eyes of God, translating the Book of Mormon, organizing the Church of Jesus Christ of Latter-day Saints, and becoming the instrument to restore the Gospel of Jesus Christ to the earth. Toward the end of his life he languished in a jail called Liberty, and he was finally martyred in Carthage Jail. As he was shot, Joseph leapt from the window exclaiming, O Lord my God! As result of his prophetic pioneering, all the blessings of Abraham, Isaac and Jacob are now available to all.
But the greatest pioneer was, is, and ever will be the Lord Jesus Christ. Many centuries before the event, Isaiah prophesied of his birth:
6 For unto us a achild is bborn, unto us a cson is given: and thedgovernment shall be upon his shoulder: and his name shall be called Wonderful, eCounsellor, The fmighty gGod, The heverlastingFather, The Prince of iPeace. (Isaiah 9:6)
Later, when his earthly parents sought him in Jerusalem, Jesus asked:
How is it that ye sought me? awist ye not that I must be about my bFather’s business? (Luke 2:49)


He increased in wisdom and stature, and in favor with God and man. Though he was sinless, he was baptized to fulfill all righteousness, and though he went about doing good (Acts 10:38), he was despised and acquainted with grief. Though earlier he was with Abraham in Moriah, and later he was with Joseph in Liberty and Carthage, in the meridian of time none were with him as he, the greatest of all, descended below all things in Gethsemane. He was the firstborn of the Father, the Only Begotten in the flesh, and he rose from the tomb, conquering death, to become the firstfruits of them who slept. After his resurrection, he ministered to his other sheep on the American continent.  With his Father, he appeared to the boy Joseph Smith, and he will someday return to earth. 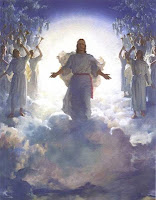 There are many other pioneers that deserve to be remember today, but Jesus Christ is the way, the truth, and the life, and the light of the world. He is the pioneer of our salvation.
Posted by John Hancock at 7:50 PM