It Hits Us in the Solar Plexus

"We recognize what is lovely because we have seen it somewhere else, and as we walk through the world, we are constantly on the watch for it with a kind of nostalgia, so that when we see an object or a person that pleases us, it is like recognizing an old friend; it hits us in the solar plexus, and we need no measuring or lecturing to tell us that it is indeed quite perfect. It is something we have long been looking for, something we have seen in another world, memories of how things should be."

- “Goods of First and Second Intent,” Collected Works of Hugh Nibley 9:528
Posted by John Hancock at 7:55 AM No comments:

There is a destiny that makes us brothers:
None goes his way alone:
All that we send into the lives of others
Comes back into our own.

I care not what his temples or his creeds,
One thing holds firm and fast
That into his fateful heap of days and deeds
The soul of man Is cast.

Edwin Markham
Posted by John Hancock at 12:00 PM No comments:

Only a dad, with a tired face,
Coming home from the daily race,
Bringing little of gold or fame,
To show how well he has played the game,
But glad in his heart that his own rejoice
To see him come, and to hear his voice.

Only a dad, with a brood of four,
One of ten million men or more.
Plodding along in the daily strife,
Bearing the whips and the scorns of life,
With never a whimper of pain or hate,
For the sake of those who at home await.

Only a dad, neither rich nor proud,
Merely one of the surging crowd
Toiling, striving from day to day,
Facing whatever may come his way,
Silent, whenever the harsh condemn,
And bearing it all for the love of them.

Only a dad, but he gives his all
To smooth the way for his children small,
Doing, with courage stern and grim,
The deeds that his father did for him.
This is the line that for him I pen,
Only a dad, but the best of men. 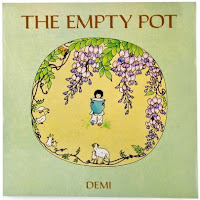 The Empty Pot (A Chinese folk tale, retold by Demi)

A long time ago in China there was a boy named Ping who loved flowers. Anything he planted burst into bloom. Up came flowers, bushes, and even big fruit trees, as if by magic!

Everyone in the kingdom loved flowers too. They planted them everywhere, and the air smelled like perfume.

The Emperor loved birds and animals, but flowers most of all, and he tended his own garden every day. But the Emperor was very old. He needed to choose a successor to the throne. Who would his successor be? And how would the Emperor choose? Because the Emperor loved flowers so much, he decided to let the flowers choose.

The next day a proclamation was issued: All the children in the land were to come to the palace. There they would be given special flower seeds by the Emperor. “Whoever can show me their best in a year’s time,” he said, “will succeed me to the throne.”

This news created great excitement throughout the land! Children from all over the country swarmed to the palace to get their flower seeds. All the parents wanted their children to be chosen Emperor, and all the children hoped they would be chosen too!

When Ping received his seed from the Emperor, he was the happiest child of all. He was sure he could grow the most beautiful flower.

Ping filled a flowerpot with rich soil. He planted the seed in it very carefully. He watered it every day. He couldn’t wait to see it sprout, grow, and blossom into a beautiful flower!

Day after day passed, but nothing grew in his pot. Ping was very worried. He put new soil into a bigger pot. Then he transferred the seed into the rich black soil. Another two months he waited. Still nothing happened.

By and by the whole year passed. Spring came, and all the children put on their best clothes to greet the Emperor. They rushed to the palace with their beautiful flowers, eagerly hoping to be chosen. Ping was ashamed of his empty pot. He thought the other children would laugh at him because for once he couldn’t get a flower to grow.

His clever friend ran by, holding a great big plant. “Ping!” he said. “You’re not really going to the Emperor with an empty pot, are you? Couldn’t you grow a great big flower like mine?”

Ping’s father overheard this and said, “You did your best, and your best is good enough to present to the Emperor.”

Holding the empty pot in his hands, Ping went straight away to the palace.

Finally, he came to Ping. Ping hung his head in shame, expecting to be punished. The Emperor asked, “Why did you bring an empty pot?”

Ping started to cry and replied, “I planted the seed you gave me and I watered it every day, but it didn’t sprout. I put it in a better pot with better soil, but still it didn’t sprout! I tended it all year long, but nothing grew. So today I had to bring an empty pot without a flower. It was the best I could do.”

When the Emperor heard these words, a smile slowly spread over his face, and he put his arm around Ping. Then he exclaimed to one and all, “I have found him! I have found the one person worthy of being Emperor!”

“Where you got your seeds from, I do not know. For the seeds I gave you had all been cooked. So it was impossible for any of them to grow.”

“I admire Ping’s great courage to appear before me with the empty truth, and now I reward him with the entire kingdom and make him Emperor of all the land!”

(see also this video)
Posted by John Hancock at 1:03 PM No comments: