There is far too little understanding of Islam in the West.

I include myself in this indictment.  It is regrettable that so many of us know next to nothing about one of the world's great monotheistic religious traditions.  Furthermore, what we do know, or what we think we know, is too often informed by the consumption and regurgitation of sensationalized media reports.  If the recent film Meet the Mormons has helped in any way to shed light on the lives and beliefs of members of the Church of Jesus Christ of Latter-day Saints (which I think it has), I can only imagine what a film like Meet the Muslims might accomplish.

But since, to my knowledge, such a film has not yet been produced, allow me to outline a few resources that may be useful in helping us to better understand Islam and the people who adhere to this widely practiced and vibrant faith.

A Few of my own Blog Posts on Islam:
Posted by John Hancock at 5:06 PM No comments:

Posted by John Hancock at 1:49 PM No comments:

Soon after I received the call to serve a mission for The Church of Jesus Christ of Latter-day Saints in Southern Italy, my dad gave the book Christ Stopped at Eboli as a gift.  I read and enjoyed the book before my mission, but only after my mission could I appreciate it more fully.

In 1935, as a result of his political activism, the Italian-Jewish painter, writer, activist, anti-fascist and doctor Carlo Levi, was exiled to Lucania, one of the poorest regions of Southern Italy.  Christ Stopped at Eboli is a poetically written memoir of his exile, the title of which comes from an expression of the people of 'Gagliano' who said of themselves: "Christ stopped short of here, at Eboli."  Levi explained that this phrase "means, in effect, that they feel they have been bypassed by Christianity, by morality, by history itself—that they have somehow been excluded from the full human experience."

Of course Levi -who was also a friend of the Italian writer Italo Calvino- wrote his memoir in Italian, but it has been translated into English.  As an undergraduate student at Brigham Young University, I wrote a brief essay on Levi's memoir Cristo si è fermato a Eboli.  There is also a cinematic adaptation of the book that I recommend to anyone who might be interested.


Here is my essay:

Posted by John Hancock at 10:26 AM No comments:

A Trip to the Not So Local Library

Speaking of a time in which hidden things will come to light, it will soon be possible to instantly access more than 4,000 ancient manuscripts from the Vatican Library.  That's right.  The Pope's personal library:

"Formally established in 1475, though in fact much older, it is one of the oldest libraries in the world and contains one of the most significant collections of historical texts. It currently has 75,000 codices from throughout history, as well as 1.1 million printed books, which include some 8,500 incunabula." (Wikipedia)

Someday perhaps the "Secret Archives" will be available for all, not just the Holy See, to see as well.

Posted by John Hancock at 1:22 PM No comments:

The Mantle of Charity

"It is one evidence that men are unacquainted with the principles of godliness to behold the contraction of affectionate feelings and lack of charity in the world. The power and glory of godliness is spread out on a broad principle to throw out the mantle of charity. God does not look on sin with allowance, but when men have sinned, there must be allowance made for them. … The nearer we get to our heavenly Father, the more we are disposed to look with compassion on perishing souls; we feel that we want to take them upon our shoulders, and cast their sins behind our backs. …

“… How oft have wise men and women sought to dictate Brother Joseph by saying, ‘Oh, if I were Brother Joseph, I would do this and that;’ but if they were in Brother Joseph’s shoes they would find that men or women could not be compelled into the kingdom of God, but must be dealt with in long-suffering, and at last we shall save them. The way to keep all the Saints together, and keep the work rolling, is to wait with all long-suffering, till God shall bring such characters to justice. There should be no license for sin, but mercy should go hand in hand with reproof." - Joseph Smith, History of the Church, 5:24
Posted by John Hancock at 4:54 PM No comments:

The Wise Lawgiver and Just Judge

"The great designs of God in relation to the salvation of the human family, are very little understood by the professedly wise and intelligent generation in which we live. Various and conflicting are the opinions of men concerning the plan of salvation, the [requirements] of the Almighty, the necessary preparations for heaven, the state and condition of departed spirits, and the happiness or misery that is consequent upon the practice of righteousness and iniquity according to their several notions of virtue and vice. …

… While one portion of the human race is judging and condemning the other without mercy, the Great Parent of the universe looks upon the whole of the human family with a fatherly care and paternal regard; He views them as His offspring, and without any of those contracted feelings that influence the children of men, causes ‘His sun to rise on the evil and on the good, and sendeth rain on the just and on the unjust.’ [Matthew 5:45.] He holds the reins of judgment in His hands; He is a wise Lawgiver, and will judge all men, not according to the narrow, contracted notions of men, but, ‘according to the deeds done in the body whether they be good or evil,’ or whether these deeds were done in England, America, Spain, Turkey, or India. He will judge them, ‘not according to what they have not, but according to what they have’; those who have lived without law, will be judged without law, and those who have a law, will be judged by that law. We need not doubt the wisdom and intelligence of the Great Jehovah; He will award judgment or mercy to all nations according to their several deserts, their means of obtaining intelligence, the laws by which they are governed, the facilities afforded them of obtaining correct information, and His inscrutable designs in relation to the human family; and when the designs of God shall be made manifest, and the curtain of futurity be withdrawn, we shall all of us eventually have to confess that the Judge of all the earth has done right [see Genesis 18:25]." - Joseph Smith, History of the Church, 4:595–96
Posted by John Hancock at 4:49 PM No comments:

So Shines a Good Deed 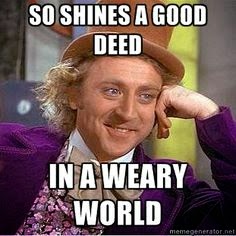 "So shines a good deed in a weary world." - Willy Wonka

Posted by John Hancock at 7:27 PM No comments:

The Power of Kindness


"Nothing is so much calculated to lead people to forsake sin as to take them by the hand, and watch over them with tenderness. When persons manifest the least kindness and love to me, O what power it has over my mind, while the opposite course has a tendency to harrow up all the harsh feelings and depress the human mind." - Joseph Smith, History of the Church, 5:23–24

"I have wept in the night
At my shortness of sight
That to others' needs made me blind,
But I never have yet
Had a twinge of regret
For being a little too kind." - C.R. Gibson

"Kindness is powerful, especially in a family setting." - Elder Dallin H. Oaks, Loving Others and Living With Differences

Posted by John Hancock at 7:21 PM No comments:

"Repentance is a thing that cannot be trifled with every day. Daily transgression and daily repentance is not that which is pleasing in the sight of God." - Joseph Smith, History of the Church, 3:379
Posted by John Hancock at 7:10 PM No comments:

Posted by John Hancock at 9:35 PM No comments: