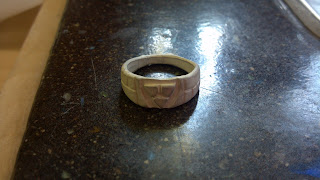 I have always had a strong desire to create. Recently, I decided to take a class on silversmithing in order to learn how to make a ring. Besides the Raku class that I took in high school, and a few rare encounters  with other 3-dimensional art forms, such as glass blowing, most of the art work that I have produced has been 2-dimensional... sketches, drawings, paintings, and the like. Producing a ring was a process unlike any other that I have encountered thus far.

I first sketched out several designs on paper, and chose the one that I liked the best. I took the design proposal to the studio where Brittany Golden began to guide a few students and I through basics of ring making.  Each student received a thick wax ring, and with different tools we began to carve our designs into the wax. We took the wax home to work on it, and returned to the studio when we were ready to begin phase two. Brittany took our wax rings to Salt Lake where they were placed into a mold.  The wax was melted away and the mold was with filled in with silver.

Later, we ground away the small protrusions on the rings using a sanding wheel. We refined, polished and buffed the silver with different tools until our rings were as shiny as mirrors. We washed off the excess grime and polish until we were fully satisfied with the final product. I still have the option of adding color to my ring, as well as a small jewel, perhaps even a diamond. 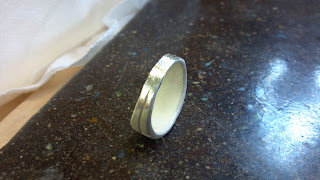 This process took several days to complete, and I spent several hours at home and in the studio with my ring. Now that it rests comfortably upon my finger, I feel a sense of joy and satisfaction in the work. Another benefit of ring making is that the process afforded me several hours of concentration and undistracted meditation. As I worked with my little ring, I let the solemnities of eternity rest upon my mind.

Although my ring, like any material possessions, will eventually be corrupted by moth and rust, it's shape and design are symbolic of eternity. Unlike rings, our spirits are eternal. We are each unique, and we bear the imprint of God, because we are created in His image, male and female. In order to become complete and finished, the wax, protrusions, rough edges, scratches, bumps, and grime of our lives need to be eliminated. We are all in God's hands, and sometimes carving, melting, grinding, and polishing touches come through adversity. The heat and friction of adversity provide necessary refinement and polishing.  Add to that the various colors of personality, and the precious stones of experience, and the finished product is beautiful... 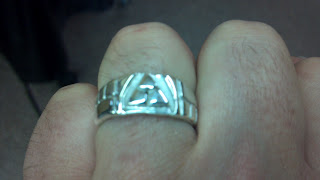 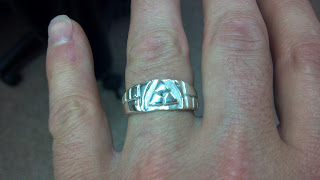