The word "Diamond" comes from the Greek word αδάμας – adámas, meaning "unbreakable".  Diamonds are an allotrope of carbon, meaning that the element is bonded together in a different manner  than other types of carbon, such as graphite.  Diamonds are hard, highly thermally conductive, transparent, face-centered crystals made up of tetrahedral lattices that are held together by strong covalent bonds. The strongest diamonds can only be scratched by other diamonds.  For this reason, diamonds are often used in cutting and polishing tools.  Some of the hardest natural diamonds originate in New South Wales, Australia, which is, coincidentally, the place where my mother was born. 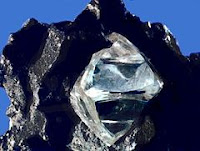 Diamonds are also tough, meaning they are highly resistant to breakage upon forceful impact.  In addition to such strong physical components, diamonds also have noteworthy optical characteristics, such as high resistance to contamination and impurities, and high ability to disperse multi-colored light, making them some of the world's most popular gemstones.

Diamonds are mostly formed under great pressure and heat over more than a billion years, and come to the earth's surface in the form of igneous rock by way of magma and volcanic eruptions, although other diamonds come from meteorites or are produced synthetically. There is even evidence that white dwarf stars are actually diamonds at their core.

Whether gem-grade or industrial, diamonds have innumerable interesting facets to consider.  Diamonds have been discovered in many countries, such as India, Brazil, Russia, Australia, and the Congo. Prospectors search the world over for traces of volcanic pipes that could contain diamonds. 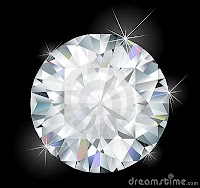 I once visited a diamond store in Israel, and although I thought little of the excursion at the time, I later discovered that Israel is a major player in the wholesale diamond industry. Many centuries ago, a Jewish diamond cutter by the name of Lodewyk van Berken invented the scaif, a polishing wheel infused with a mixture of olive oil and diamond dust that revolutionized the diamond industry by enabling jewelers to polish every facet of a diamond symmetrically at angles that best reflected light.  Since that time, and even through the Shoah, many Jews have played a significant role in the diamond industry.

While I was reflecting on how diamonds reflect light, and considering that even the brightest, most scintillatingly radiant and luminescent diamond, began as a rough stone, I recalled that the Prophet Joseph Smith described himself as a rough stone rolling.  Even so, his teachings so often reflect the light of the Savior's love.  On one occasion he declared that “Souls are as precious in the sight of God as they ever were, and the Elders were never called to drive any down to hell, but to persuade and invite all men everywhere to repent, that they may become the heirs of salvation.” This charitable facet of the prophet's character reflected the light of the the Lord's injunction to "Remember the worth of souls is great in the sight of God." (D&C 18:10) 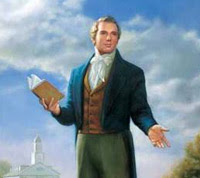 Elder Neil A. Maxwell revealed another facet of this truth when he stated that "Disciples, like diamonds, are developed in a process of time and heavy pressures, and both the disciple and the diamond reflect and magnify the light that comes through them." (Press Forward, pg. 125)  Elder Maxwell also remarked that "Jesus was weary but never bored. He was ever tutoring, but never condescending. His doctrines are like glistening diamonds with many dimensions, displaying their verity and beauty, facet by facet, depending on the faith and preparation of the beholder." On another occasion Elder Maxwell demonstrated that the scriptures offer so many doctrinal diamonds, and "when the light of the Spirit plays upon their several facets, they sparkle with celestial sense and illuminate the path we are to follow." 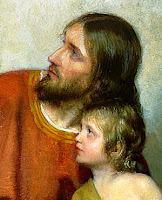 Jesus Christ is the way, the truth, and the life... the light of the world, whose gospel shines like a diamond against the black velvet backdrop of the world.  Modern prophets have testified that "His life, which is central to all human history, neither began in Bethlehem nor concluded on Calvary. He was the Firstborn of the Father, the Only Begotten Son in the flesh, the Redeemer of the world."

This diamond truth sheds light and color on every facet of life.