Verseball: A New Olympic Sport for 2016

Now that we are well into the 2012 Olympics, and even though the U.S.A. is currently trailing China in the medal count, I suppose it is time for me to write about the future Olympic sport of VERSEBALL. Anyone who knows me understands that I am sports enthusiast; I enjoy playing almost any sport, and I enjoy watching almost any sport.  What you may not know is how Verseball came about, and why I think it should be an Olympic sport.

My cousin Shon and I first conceived of the idea of Verseball while working as summer sports camp coaches in a gym in Mesa, Arizona.  The routine gymnastics games were fun, but we wanted to create something new and exciting for the youth, a game that would be accessible to all but still challenging.  Shon and I spent many hours in the gym and at the park playing different sports, and we wanted to create a game that involved a variety of individual skills, but that also required passing and teamwork. We began by drawing a triangular field divided into three equal triads.  We decided that three teams of three players each would play against each other, each team trying to score on either one of the other two teams' goals.  We designed the field, bought pvc pipes and nets, and set to work.  Then we invited the kids out to play and began developing the rules.

Since that time I have introduced Verseball to many friends and taught the sport to school groups and church groups.  We even held a tournament one year on the 4th of July as part of an Independence Day celebration.  A group of Air Force cadets actually won the very first Verseball championship. 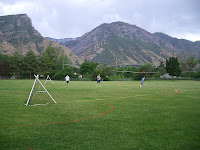 Verseball is easy to learn.  We derived the name Verseball from the word versatile. Players can use both hands and feet to advance the ball toward either one of the opponents' goals to score, and there are different areas of the goals to score on that are worth different points (Click here to see the rules and strategy of the game).  Verseball would be an exciting new edition to the Olympics not only because it would involve three teams playing simultaneously, but also because players could demonstrate a wide variety of athletic skills and game strategies.

I have been inspired by people such as James Naismith (the inventor of basketball) and Pierre de Coubertin (father of the modern Olympic games), as well as by others whom I later discovered who have also created new sports (see for example Bossaball, Kronum League, Tchoukball, Kin Ball, Fistball, and Sepaktakraw, see also here and here).

For now the game is played only recreationally, or by invitation from schools or other interested groups, but perhaps some day it could become a great addition to Olympic sports.