This is one of my favorite Disney movies of all time... jam packed with adventure and good wholesome family fun. Enjoy!
Posted by John Hancock at 1:40 AM No comments:

The Hobbit, the Plan, and the Gay Marriage Ban

Here are a few of my personal reflections on recent developments in the same-sex marriage debate.
Posted by John Hancock at 9:07 PM No comments:

Recently I have been listening to Truman G. Madsen's lectures on the Presidents of the Church.  These lectures are exceedingly well done, and exceedingly rich in testimony, and true teaching.

1. I would be a friend to the friendless and find joy in ministering to the needs of the poor.
2. I would visit the sick and afflicted and inspire in them a desire for faith to be healed.
3. I would teach the truth to the understanding and blessing of all mankind.
4. I would seek out the erring one and try to win him back to a righteous and a happy life.
5. I would not seek to force people to live up to my ideals but rather love them into doing the thing that is right.
6. I would live with the masses and help to solve their problems that their earth life may be happy.
7. I would avoid the publicity of high positions and discourage the flattery of thoughtless friends.
8. I would not knowingly wound the feelings of any, not even one who may have wronged me, but would seek to do him good and make him my friend.
9. I would overcome the tendency to selfishness and jealousy and rejoice in the successes of all the children of my Heavenly Father.
10. I would not be an enemy to any living soul.
11. Knowing that the Redeemer of mankind has offered to the world the only plan that will fully develop us and make us really happy here and hereafter, I feel it not only a duty but also a blessed privilege to disseminate this truth.

President Smith lived up to these ideals of a Christ-like life, and has inspired me to strive to do the same.  These are simply excellent guidelines toward developing a Christ-like character.
Posted by John Hancock at 2:21 PM No comments:

"Now, what do we hear in the gospel which we have received? A voice of gladness! A voice of mercy from heaven; and a voice of truth out of the earth; glad tidings for the dead; a voice of gladness for the living and the dead; glad tidings of great joy. How beautiful upon the mountains are the feet of those that bring glad tidings of good things, and that say unto Zion: Behold, thy God reigneth! As the dews of Carmel, so shall the knowledge of God descend upon them!" (D&C 128:19)
Posted by John Hancock at 12:57 PM No comments:

In the Bleak Midwinter

Posted by John Hancock at 11:27 PM No comments: 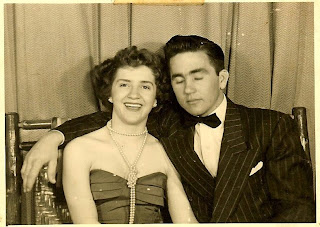 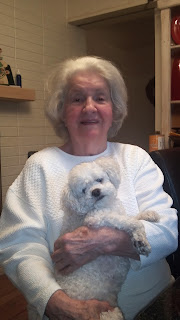 Part 2: Growing Up and Meeting Grandpa


Part 4: Grandpa's Passing to the Present and Beyond

"Behold, I will send you Elijah the prophet before the coming of the great and dreadful day of the Lord: / And he shall turn the heart of the fathers to the children, and the heart of the children to their fathers, lest I come and smite the earth with a curse." (Malachi 4:5-6)

Part 4: Grandpa's Passing to the Present, and Beyond (Dec. 13, 2013): a. kids, oldest to youngest b. story of Grandma getting in a fight c. describing children and grandchildren d. on the importance of family sticking together through ups and downs e. from the time of Grandpa's death to now f. Grandpa Ikey Guthrie g. final counsel
Posted by John Hancock at 12:37 PM 2 comments:

This is easily one of my favorite Monty Python sketches of all time.  Don't miss Socrates' amazing header to win the match. (Special thanks to Bradly Rebeiro for sharing this clip with me.)
Posted by John Hancock at 11:17 AM No comments:

Find Your Family Crest and Coat of Arms

This is a fun website, for those of you who would would like to find your family crest / coat of arms, and the history of your family name.  At least, I can use the ancient crest from the British Isles to design my own modern version someday: 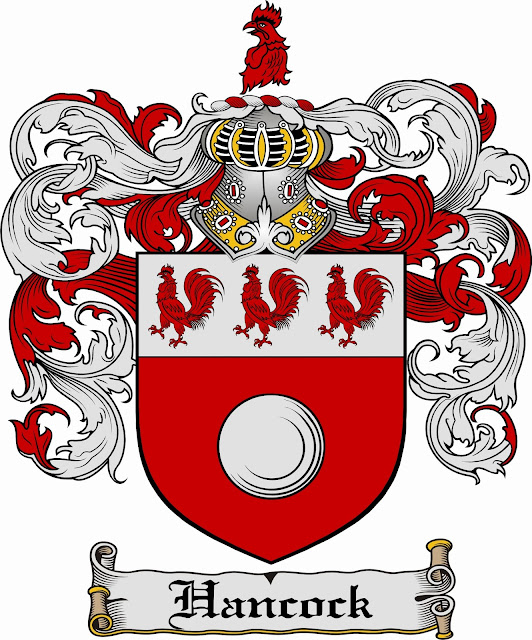 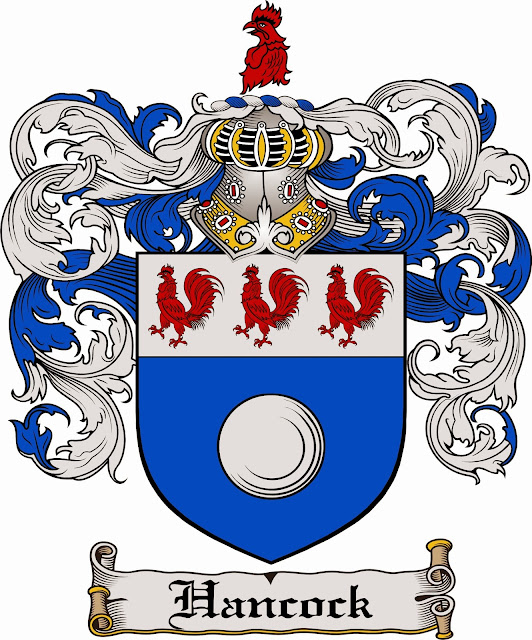 Posted by John Hancock at 3:39 PM No comments:

But still the oak tree held its ground
While other trees fell all around
The weary wind gave up and spoke.
How can you still be standing Oak?

The oak tree said, I know that you
Can break each branch of mine in two
Carry every leaf away
Shake my limbs, and make me sway

But I have roots stretched in the earth
Growing stronger since my birth
You'll never touch them, for you see
They are the deepest part of me

Until today, I wasn't sure
Of just how much I could endure
But now I've found, with thanks to you
I'm stronger than I ever knew
Posted by John Hancock at 11:25 AM No comments:

All Things Denote There is a God

Last night a friend and I attended an Interfaith Panel Discussion at the Springville Museum of Art.  The theme of the discussion was "Art & Worship," and the panel featured representatives from several faiths, including Catholicism, Islam, Hinduism, Judaism, Presbyterianism and the Church of Jesus Christ of Latter-day Saints.  After brief presentations by each of the representatives, the members of the panel answered questions and drew further parallels between worship and the creative arts.

The presentations were instructive and edifying, as was the discussion following the presentations.  At the conclusion of the event, the woman representing the LDS faith made the point that much of the best loved iconography of The Church of Jesus Christ of Latter-day Saints has been produced by people of different faiths.  In fact, the religious art of Carl Bloch, Heinrich Hoffman, and Frans Schwartz is now on display at the BYU Museum of Art in an exhibit entitled "Sacred Gifts".

As the representatives for each faith presented a brief history and commentary on the role of art in worship, it became clear that each considered God to be the Supreme Artist, and that one of the purposes of art is to glorify the God as the Great Creator of the universe and of mankind.  Although each faith tradition and each individual artist is unique, the process of creation is itself a reflection of divinity.  In the words of the Prophet Alma: 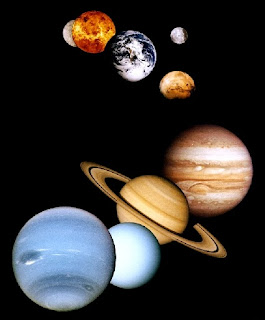 As beings created in the image and likeness of God, we have been endowed, though currently on a much smaller scale, with the ability and the capacity to create.  There is already much of beauty and wonder that is on display in the universe, and on this earth, but the creations of God are without number and without end:

"And worlds without number have I created; and I also created them for mine own purpose; and by the Son I created them, which is mine Only Begotten." (Moses 1:33) 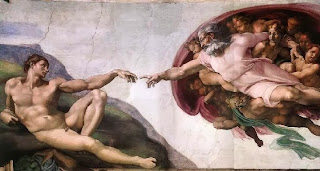 "And as one earth shall pass away, and the heavens thereof even so shall another come; and there is no end to my works, neither to my words.

For behold, this is my work and my glory—to bring to pass the immortality and eternal life of man." (Moses 1:38-39)

"The Standard of Truth has been erected; no unhallowed hand can stop the work from progressing; persecutions may rage, mobs may combine, armies may assemble, calumny may defame, but the truth of God will go forth boldly, nobly, and independent, till it has penetrated
every continent, visited every clime, swept every country, and sounded in every ear, till the purposes of God shall be accomplished, and the Great Jehovah shall say the work is done." (Joseph Smith, History of the Church, 4:540)
As the Lord declared in the record of Nephi: 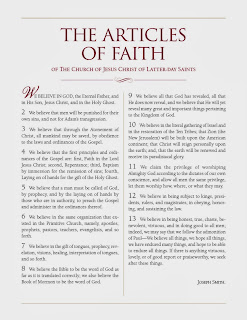 "And I do this that I may prove unto many that I am the same yesterday, today, and forever; and that I speak forth my words according to mine own pleasure. And because that I have spoken one word ye need not suppose that I cannot speak another; for my work is not yet finished; neither shall it be until the end of man, neither from that time henceforth and forever." (2 Ne. 29:9)

Or, as the the Prophet Joseph Smith wrote in his Wentworth Letter:

"We believe all that God has revealed, all that He does now reveal, and we believe that He will yet reveal many great and important things pertaining to the Kingdom of God." (Articles of Faith 1:9)

In other words, many masters of music, drawing, painting, sculpture, theater, film, literature, poetry and dance have already added their contributions of beauty and truth to the world, and it is well that we study and become familiar with their works.  But, in many ways, the work of creation is just beginning (see The Arts and the Spirit of the Lord).

Who Does God's Work Will Get God's Pay

Who Does God's Work Will Get
God's Pay

- Dennis McCarthy
Posted by John Hancock at 10:48 AM No comments: