Treasure up the Word

During the past month, Elder Jay E. Jensen, an emeritus general authority and former member of the Presidency of the Quorum of the Seventy of the Church of Jesus Christ of Latter-day Saints, taught a series of institute classes on the Book of Mormon to a group of young (and not so young) LDS single adults before embarking on his next assignment as President of the Cochabamba Bolivia Temple.  The doctrine, testimonies and insights shared during this brief time helped to fortify, deepen, and expand my personal testimony of the Book of Mormon, and to strengthen my faith in, and love for, both God the Father and His Beloved Son Jesus Christ.  In connection with the institute classes, Elder Jensen recommended a book (that I just finished reading) that he wrote as a companion to the scriptures and a source of encouragement for improved scripture study by the homiletic title Treasure Up the Word.

While it would be impractical to record everything that Elder Jensen taught, or everything contained in his slim but scintillating volume Treasure Up the Word, perhaps a brief summary of both the classes and the book may be of worth to someone somewhere who is seeking greater light and truth, or who is simply seeking to improve his or her scripture study.  Of course, the most important teachings are to be discovered between the written lines or behind the spoken word, but much of what Elder Jensen taught in the class can be found in his book.  One priceless spiritual gem to consider is found in the third chapter of Treasure Up the Word:

"Looking at the scriptures is like looking at a favorite tree, one half of which is above ground and has always been open to study and examination, either close up (micro) or from a distance (macro).  But now you realize that one half of the tree is hidden beneath the ground - the roots.  These life-giving extremities of a tree send nourishment to all that is visible above ground.  What we can see of the tree above ground can be likened to reading and studying.  Like the tree that can be examined close up or at a distance, the scriptures written in columns, verses, sentences, paragraphs, words, and so forth, can be examined either close up or at a distance.  However, the roots under the ground are hidden to the mortal eye.  It is so also with the scriptures: much is hidden to the mortal eye.  Only by searching, pondering, likening, and prayerful reflection will we discover hidden truths. / Until we discover in the scriptures the full tree- roots, trunk, branches, and leaves- we have yet to find the promised height, breadth, and depth in those holy books.  It is a truth that some of the most precious truths in the scriptures are hidden the deepest and with the greatest care.  The Prophet Joseph Smith reminded us that 'the things of God are of deep import; and time, and experience, and careful and ponderous and solemn thoughts can only find them out' (TPJS, p. 137)"

The titles of the chapters in Treasure Up the Word include "The Spirit and the Scriptures," "The Power of the Word," "The Three P's of Scripture Study," "Scripture Marking," "Principles of Substitution," "Lists," "Definitions," "Visualizing," "Homilies," "Uniting Truths," "Revelation and Scripture Study," "Story Parallels," and "Promises of the Living Prophets."  Each short chapter is replete with spiritual power and practical counsel. 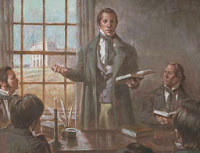 In fact, while I was reading about some of Elder Jensen's family, teaching and leadership experiences, I was reminded of a few statements made by Brigham Young about the character and teachings of the Prophet Joseph Smith:


"The excellency of the glory of the character of Brother Joseph Smith was that he could reduce heavenly things to the understanding of the finite. When he preached to the people—revealed the things of God, the will of God, the plan of salvation, the purposes of Jehovah, the relation in which we stand to him and all the heavenly beings—he reduced his teachings to the capacity of every man, woman and child, making them as plain as a well defined pathway. This should have convinced every person that ever heard him, of his divine authority and power, for no other man was able to teach as he could, and no person can reveal the things of God, but by the revelations of Jesus Christ." (see footnote 6 of Elder Christofferson's BYU Idaho Devotional Speech The Prophet Joseph Smith)

On other occasions, Brigham Young declared:

"What a delight it was to hear Brother Joseph talk upon the great principles of eternity: he would bring them down to the capacity of a child, he would unite heaven with earth” (459; also in JD 4:54).

“In my experience I never did let an opportunity pass of getting with the Prophet Joseph and of hearing him speak in public or in private, so that I might draw understanding form the fountain from which he spoke, that I might have it and bring it forth when it was needed” (JD 12:269)

I could sense in Elder Jensen's teaching, and in his simple but profound little book, a portion of the gift that Joseph Smith possessed and that Joseph Smith's friend, Parley P. Pratt described as follows,


"His [Joseph Smith's] language abounding in original eloquence peculiar to himself—not polished—not studied—not smooth and softened by education and refined by art: but flowing forth in its own narrative simplicity, and profusely abounding in a variety of subject and manner. He interested and edified while, at the same time, he amused and entertained his audience: and none listened to him that were ever weary with his discourse. I have known him to retain a congregation of willing and anxious listeners for many hours together, in the midst of cold or sunshine, rain, or wind, while they were laughing at one moment and weeping the next. Even his most bitter enemies were generally overcome if he could once get in their ears. (45–46)."

This last statement resonates with the conclusion of Elder Jensen's book Treasure Up the Word, in a brief chapter entitled "Promises of the Living Prophets":

"However talented men may be in administrative matters; however eloquent they may be in expressing their views; however learned they may be in worldly things- they will be denied the sweet whisperings of the Spirit that might have been theirs unless they pay the price of studying, pondering, and praying about the scriptures." - Bruce R. McConkie

If you or someone you know is seeking to improve his or her scripture study and to enhance his or her communication with the Divine, I feel confident in promising that Elder Jensen's primer Treasure Up the Word will point you in the right direction and help you gain a greater appreciation for the power of the word of God.  It might just give you or someone you know that extra incentive to pay the price for a stronger testimony of the truth, and to obtain the promise of the Lord:

"And whoso treasureth up my word, shall not be deceived, for the Son of Man shall come, and he shall send his angels before him with the great sound of a trumpet, and they shall gather together the remainder of his elect from the four winds, from one end of heaven to the other." (JS-Matthew 1:37) 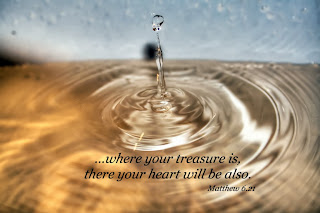