Fire for the Deed

When I was in the fifth grade I had a wonderful teacher who instilled in her students a love for American Heritage.  In fact, the school that my brothers and I attended was aptly named American Heritage School, and Mrs. Cornell, my fifth grade teacher, revered the lives and the legacies of those who did so much to help establish the United States of America.  She was a particularly devoted advocate of the young Italian who, in 1492, sailed under the auspices of the Spanish crown. 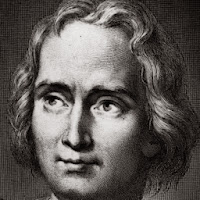 At American Heritage we prayed and recited the national anthem daily. We sang in choirs and enacted plays about the American Revolution. We were taught mathematics, science, grammar, history and other subjects. But anyone who remembers Mrs. Cornell could not soon forget her great admiration for Christopher Colombus.

If I hadn't been so busy flirting with the grade school grade beauties, battling on the playground basketball court, or getting sent home from school for valiantly defending myself in a snowball fight, I might have better appreciated that which Mrs. Cornell was trying to teach us.  In retrospect it is clear that this great teacher was imbuing her students with a sense of respect, and inculcating gratitude for the precious gift of liberty.  Of course, these principles were not alien to me at the time, but Mrs. Cornell's lessons did much to reinforce and build upon lessons already learned at home.

Unfortunately, the history of Christopher Columbus often tends toward two extremes.  The first and most destructive extreme is found in the relativism of the revisionist historian.  These are the would-be historians who despise America and anything that made America great, including one of its earliest explorers, because the discovery and colonization of America contradicts their multicultural worldview.  For a candid assessment of this extreme, consider Dinesh D'Souza's First Things article from 1995 entitled "The Crimes of Cristopher Columbus."  On the opposite extreme, others, not unlike some of the ancient American inhabitants, try to elevate Columbus to the status of a deity. Truthfully, Columbus was neither a demon nor a demigod. He was, as Mrs. Cornell taught long ago, a man who acted under inspiration for purposes greater than his own: 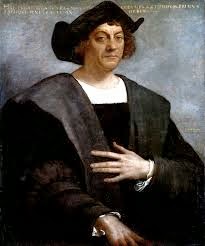 "The Lord was well disposed to my desire and he bestowed upon me courage and understanding; knowledge of seafaring he gave me in abundance . . . and of geometry and astronomy likewise . . . The Lord with provident hand unlocked my mind, sent me upon the sea, and gave me fire for the deed. Those who heard of my enterprise called it foolish, mocked me and laughed. But who can doubt that the Holy Ghost inspired me?" - (see Jacob Wasserman, Columbus, the Don Quixote of the Seas)

As part of an extensive vision, the Book of Mormon prophet Nephi witnessed this same voyage:

Consider for a moment that during his first voyage, and after having sailed for many day toward a hoped for destiny, under the rising threat of a mutinous crew, Columbus had ample courage and perseverance in the face of uncertainty to add a simple note to his diary: "This day we sailed on."  (See Lillian Eichler Watson, ed., Light from Many Lamps (1979), 138.) 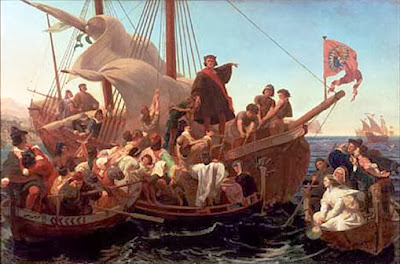 "The temple work for the fifty-six signers of the Declaration of Independence and other founding fathers has been done. All these appeared to Wilford Woodruff when he was president of the St. George Temple. President George Washington was ordained a high priest at that time. You will also be interested to know that, according to Wilford Woodruff’s journal, John Wesley, Benjamin Franklin, and Christopher Columbus were also ordained high priests—by proxy, of course—at that time.  When one casts doubt about the character of these noble sons of God, I believe he or she will have to answer to the God of heaven for it. " - Ezra Taft Benson