The Lord Looks on the Heart: An Introduction to Malcolm Gladwell

If you haven't heard of Malcolm Gladwell, you probably will in the near future.  Actually, if you are reading this, then you have just heard of him.  So, who is he?

Malcolm Gladwell is a popular journalist, best-selling author and public speaker. He has written five books: The Tipping Point: How Little Things Make a Big Difference, Blink: The Power of Thinking without Thinking, Outliers: The Story of Success, What the Dog Saw: And Other Adventures, and David and Goliath: Underdogs, Misfits and the Art of Battling Giants.

Thus far I have read two of his books (Outliers and David and Goliath, and a the first part of Blink), and watched his Ted-X presentation on happiness and spaghetti sauce.  He is certainly a creative story teller and a talented orator.  Plus, his hair style and demeanor are somewhat endearing. 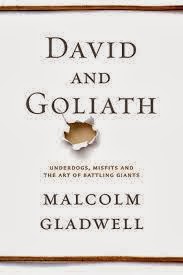 Gladwell weaves his tales out of research gleaned in the fields of sociology and psychology, tracing seemingly unexpected patterns and themes to form an inspirational narrative.  After finishing David and Goliath: Underdogs, Misfits and the Art of Battling Giants, I have gathered that Gladwell has perhaps unwittingly placed his finger on a few important principles.  The reason I mention this is because Gladwell begins his most recent book with a verse of scripture from the Bible: 1 Samuel 16:7:

"But the Lord said to Samuel, 'Do not look on his appearance or on the height of his stature, because I have rejected him; for the Lord does not see as mortals see; they look on the outward appearance, but the Lord looks on the heart.'"

The important principles that Gladwell has perhaps innocently and unknowingly deduced from his studies and musings are that truth and wisdom are to be found in the word of God and in the lessons derived from difficult experiences.  I say unknowingly only because his focus is not to tell the truth, but to tell a story.  And I am not alone in assessing Gladwell's work as charming but somewhat misleading (see, for example, here, here, here and here). Granted, Gladwell is more of an entertainer and an rhetorician than a philosopher or a serious thinker, but his influence is pervasive enough to merit careful attention and scrutiny.

This is not to say that I doubt his sincerity at all.  In fact, from what I have read of his work, I get the impression that he, like the rest of us, is on a quest to discover something true.  The problem is that he presents his stories as a record of patterns and facts drawn from research, and he does so to an increasingly vast audience that is liable to receive these stories as truth. Again, I don't fault him for this because at least he makes it clear in a recent interview that his writing and speaking are evidences of the process of "seeking" more than the results of "finding":

"I’ve had a different journey. I had drifted away a little bit. This book has brought me back into the fold. I was so incredibly struck in writing these stories by the incredible power faith had in people’s lives, it has made a profound impact on me in my belief. That’s been the completely unexpected effect of writing this book. I am in the process of rediscovering my own faith again."

Gladwell derives the substance of his latest book from the miraculous victory of a young shepherd over a formidable and a well-armed opponent.  In a nutshell, his thesis is that the success of "underdogs" often comes as a result of more than sheer persistence, luck or miraculous intervention, but by fighting in an unconventional manner:

"I think there has been an overemphasis of the idea that David’s victory was improbable. When you look closer to that story and you understand the full historical context, you see it from a different perspective. Here was a guy who brilliantly changed the rules of combat. He was equipped with a sling that was routinely used by armies to defeat the sort that Goliath was. David was very skilled at using the weapon and he was filled with the spirit of the Lord. Put those things together, why is he an underdog? He’s smarter than his opponent, better armed and he had this extraordinary force in his heart. When you understand that perspective, you understand that sometimes our instinct about where power comes from is wrong." (from the interview linked above)

Gladwell begins the first chapter of his latest book by posing questions that so-called "underdogs" may often ask themselves: "Should I play by the rules or follow my own instincts?" "Shall I persevere or give up?" "Should I strike back or forgive?"  In the subsequent chapters, Gladwell answers these questions by drawing inspiration from a variety of groups and individuals who have overcome challenges or adverse circumstances.

In summary, Malcolm Gladwell is a skillful narrator, almost like a minstrel, whose work is not necessarily based in solid historical facts or reliable science.  He himself admits as much:

“I am a story-teller, and I look to academic research … for ways of augmenting story-telling. The reason I don’t do things their [academic] way is because their way has a cost: it makes their writing inaccessible. If you are someone who has as their goal ... to reach a lay audience ... you can't do it their way.” 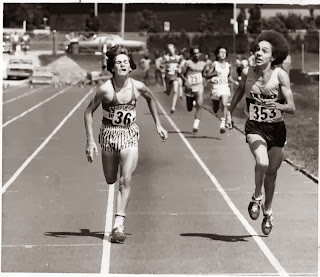 And reach a lay audience he has.  Whether or not that lay audience will be able to examine his claims
critically without accepting them at face value remains to be seen.  Nevertheless, I am inclined to be sympathetic toward a man with such amazing hair (see right) who seems to have a great affinity for the Bible, as well as what appears to be a respectful deference toward those who have emerged triumphantly from adverse circumstances:

"The right question is whether we as a society need people who have emerged from some kind of trauma – and the answer is that we plainly do." (see here)