On the topic of revelation, the Prophet Joseph Smith once stated: "Reading the experience of others, or the revelation given to them, can never give us a comprehensive view of our condition and true relation to God. Knowledge of these things can only be obtained by experience through the ordinances of God set forth for that purpose. Could you gaze into heaven five minutes, you would know more than you would by reading all that ever was written on the subject.” (TPJS, p. 324; cf. HC 6:50). He also declared that "the best way to obtain truth and wisdom is not to ask it from books, but to go to God in prayer, and obtain divine teaching" (TPJS, p. 191).

Of course, this does not mean that we should not read voraciously and study assiduously to obtain as much knowledge as we can on any and every subject, but that an understanding of the truth concerning the things that matter most cannot be granted by any one other that God himself through the power of His messenger, the Holy Ghost.

The Apostle Paul wrote: "For what man knoweth the things of a man, save the spirit of man which is in him? even so the things of God knoweth no man, but the Spirit of God." (1 Cor. 2:11) and "Which things also we speak, not in the words which man’s wisdom teacheth, but which the Holy Ghost teacheth; comparing spiritual things with spiritual. But the natural man receiveth not the things of the Spirit of God: for they are foolishness unto him: neither can he know them, because they are spiritually discerned. (1 Cor. 2:13-14)

In the preceding verses of his first epistle to the Corinthians the Apostle Paul wrote: "And I, brethren, when I came to you, came not with excellency of speech or of wisdom, declaring unto you the testimony of God. For I determined not to know any thing among you, save Jesus Christ, and him crucified. And I was with you in weakness, and in fear, and in much trembling. And my speech and my preaching was not with enticing words of man’s wisdom, but in demonstration of the Spirit and of power: That your faith should not stand in the wisdom of men, but in the power of God." (1 Cor. 2:1-5)

The Prophet Joseph Smith, who had a great affinity with the Apostle Paul, exemplified this principle of receiving truth directly from God:

"During this time of great excitement my mind was called up to serious reflection and great uneasiness; but though my feelings were deep and often poignant, still I kept myself aloof from all these parties, though I attended their several meetings as often as occasion would permit. In process of time my mind became somewhat partial to the Methodist sect, and I felt some desire to be united with them; but so great were the confusion and strife among the different denominations, that it was impossible for a person young as I was, and so unacquainted with men and things, to come to any certain conclusion who was right and who was wrong.”

“My mind at times was greatly excited, the cry and tumult were so great and incessant. The Presbyterians were most decided against the Baptists and Methodists, and used all the powers of both reason and sophistry to prove their errors, or, at least, to make the people think they were in error. On the other hand, the Baptists and Methodists in their turn were equally zealous in endeavoring to establish their own tenets and disprove all others.”

“In the midst of this war of words and tumult of opinions, I often said to myself: What is to be done? Who of all these parties are right, or, are they all wrong together? If any one of them be right, which is it, and how shall I know it?” 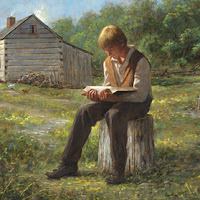 “While I was laboring under the extreme difficulties caused by the contests of these parties of religionists, I was one day reading the Epistle of James, first chapter and fifth verse, which reads: If any of you lack wisdom, let him ask of God, that giveth to all men liberally, and upbraideth not; and it shall be given him.”

“Never did any passage of scripture come with more power to the heart of man than this did at this time to mine. It seemed to enter with great force into every feeling of my heart. I reflected on it again and again, knowing that if any person needed wisdom from God, I did; for how to act I did not know, and unless I could get more wisdom than I then had, I would never know; for the teachers of religion of the different sects understood the same passages of scripture so differently as to destroy all confidence in settling the question by an appeal to the Bible.”

“At length I came to the conclusion that I must either remain in darkness and confusion, or else I must do as James directs, that is, ask of God. I at length came to the determination to ‘ask of God,’ concluding that if he gave wisdom to them that lacked wisdom, and would give liberally, and not upbraid, I might venture.”

“So, in accordance with this, my determination to ask of God, I retired to the woods to make the attempt. It was on the morning of a beautiful, clear day, early in the spring of eighteen hundred and twenty. It was the first time in my life that I had made such an attempt, for amidst all my anxieties I had never as yet made the attempt to pray vocally.”

“After I had retired to the place where I had previously designed to go, having looked around me, and finding myself alone, I kneeled down and began to offer up the desires of my heart to God. I had scarcely done so, when immediately I was seized upon by some power which entirely overcame me, and had such an astonishing influence over me as to bind my tongue so that I could not speak. Thick darkness gathered around me, and it seemed to me for a time as if I were doomed to sudden destruction.”

“But, exerting all my powers to call upon God to deliver me out of the power of this enemy which had seized upon me, and at the very moment when I was ready to sink into despair and abandon myself to destruction—not to an imaginary ruin, but to the power of some actual being from the unseen world, who had such marvelous power as I had never before felt in any being—just at this moment of great alarm, I saw a pillar of light exactly over my head, above the brightness of the sun, which descended gradually until it fell upon me.”

“It no sooner appeared than I found myself delivered from the enemy which held me bound. When the light rested upon me I saw two Personages, whose brightness and glory defy all description, standing above me in the air. One of them spake unto me, calling me by name and said, pointing to the other—This is My Beloved Son. Hear Him!”

“My object in going to inquire of the Lord was to know which of all the sects was right, that I might know which to join. No sooner, therefore, did I get possession of myself, so as to be able to speak, than I asked the Personages who stood above me in the light, which of all the sects was right (for at this time it had never entered into my heart that all were wrong)—and which I should join.”

“I was answered that I must join none of them, for they were all wrong; and the Personage who addressed me said that all their creeds were an abomination in His sight; that those professors were all corrupt; that: ‘they draw near to me with their lips, but their hearts are far from me, they teach for doctrines the commandments of men, having a form of godliness, but they deny the power thereof.’"

Thus, the best way to obtain truth and wisdom is not to ask it from books, but to follow the example of Paul or of Joseph Smith by going to God in prayer to obtain divine teaching.
Posted by John Hancock at 10:28 AM