"Are these perilous times? They are. But there is no need to fear. We can have peace in our hearts and peace in our homes. We can be an influence for good in this world, every one of us."

On Sept. 11, 2001 I was at work cleaning and polishing the bowling alleys at Brigham Young University when my manager arrived and reported that a plane had just crashed into a building in New York.  Before long a crowd had gathered in the common's area outside the recreation room to watch the news reports.  The crowd was getting larger, and the commotion was considerable enough that we stopped what we were doing for a moment.  We watched the horrific scenes, and soon the university president had called for students to gather in several different places on campus for a moment of silence and prayer. 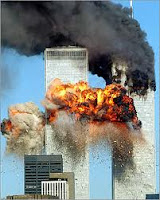 At the same time, my dad was composing a letter from his office in Indiana to one of my little brothers who was serving a mission for the Church of Jesus Christ of Latter-day Saints in San Diego:

"I'm writing this as I listen to the horrible news of terrorist
attacks in NY and DC. Needless to say, this changes everything, the end
of an age, I have a feeling. Everything will be seen in a new light- or
darkness. The illusion that we mortals have perfect control of our fate
and are entitled to ease, comfort, and every right we can invent, is
presumably shattered...
...It is natural and healthy to hope to live out our lives in
peace, comfort, normalcy - but this is not the Peace we are promised.
I'm just listening to the report that one of the towers
collapsed completely. Massive casualties; panic on the streets.Now there is a report of car bomb outside the State Dept in DC.
Now the second tower of the Trade Center has collapsed. This is war; a
new kind of war, or something in a way worse than war.
God bless us.      --Dad"


Eleven years later, a lot has changed. Counter-terrorism efforts have increased, Osama Bin Laden has been killed and his body disposed of into the ocean, and new buildings are being erected where the World Trade Center Towers once stood.

But in some ways, things remain the same. Many Americans are as complacent as ever, if not more so.  On one extreme, there are those who are forgetful or remain indifferent to the tragedy because it didn't directly affect them or their families.  On another extreme, there are those who recall the events of 9/11 in order to justify violence or a distorted sense of retribution in the name of a narrowly defined form of patriotism.  In the wake of such a tragedy, and during a politically charged presidential election season, media pundits call for more unity, but there seems to be little, if any, discussion of what unity means or how it is created.  Real unity cannot be created ex-nihilo, but necessarily a depends upon shared principles and common beliefs, such as those expressed so eloquently in The Declaration of Independence.