In Book VII of Plato's Republic, Socrates presents the allegory of the cave.  As late-modern man reads this allegory, he may feel pity for the people who have been chained to the wall of the cave for all of their lives. Moved by compassion, he may even desire to emancipate these poor souls, dragging them out into the sunlight.

Nevertheless, as Philippe Bénéton lucidly illustrates in his book Equality by Default (De l'égalité par défaut), late-modern man may want to begin by shaking off his own chains.  One reviewer of the book explains:

"For most of our contemporaries, to speak of modernity is to think immediately of liberty, equality, and democracy—and to assume that all is well. But things are not so simple. For while the culture of modernity has spread gradually throughout the West for roughly two hundred years, it accelerated in the 1960s in such a way as to undergo a subtle transformation. Hence the paradox of the world we live in: by all appearances the 'rights of man' have emerged triumphant, yet at the same time they have been emptied of substance because of their radicalization. Modern man thus finds himself isolated and ensnared. By right, his autonomy should strengthen him; but in fact, he has been dispossessed of himself. The great artifice of our time is to give conformism the mask of liberty.

Philippe Bénéton, a prominent French religious conservative, has long meditated on Tocqueville, and Equality by Default is Tocquevillian in that it does not offer a partisan polemic, but rather paints a picture of contemporary life—a picture that is also a guide for discernment for those who have a difficult time 'seeing' contemporary liberalism for what it is. Artfully translated by Ralph Hancock, Equality by Default offers a unique and strikingly insightful account of the late-modern mind."

Bénéton's Equality by Default invites late-modern man to see the cave in which he dwells for what it really is.  More importantly, it invites him to walk toward the sunlight outside of the cave where he can see things as they really are. 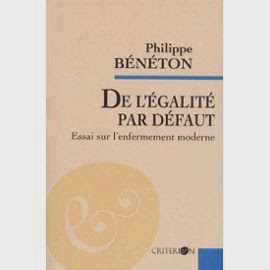