Science and Religion are Compatible? Inconceivable! 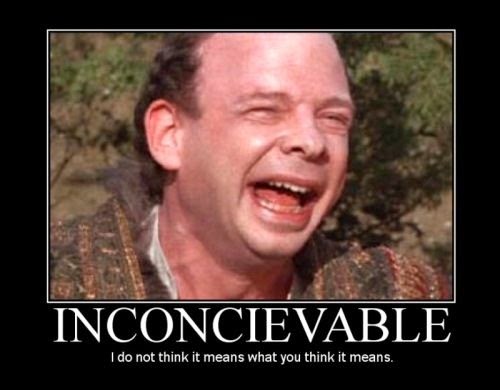 "Pray to the Lord for strength,"  Nacho Libre admonishes Esqueleto, his less corpulent tag-team wrestling partner.  Esqueleto's response might as well be canonized as the first article of faith for the religion of secularism: "I don't believe in God.  I believe in science."

But what does science mean?  Just like Jefe's understanding of the word plethora in ¡Three Amigos! there seems to be something lacking in the conventional understanding of the Latinate word. The Sicilian in The Princess Bride may have been using the word inconceivable correctly, but if Inigo Montoya questioned him, what's wrong with a little skepticism regarding the authority of Esqueleto's god?

Etymologically speaking, science is "what is known, knowledge (of something) acquired by study." From the Latin scientia, science is "knowledge, a knowing; expertness," or from sciens (genitive scientis), "intelligent, skilled."  The present participle scire means "to know."  This word probably originated from the Latin scindere, meaning "to cut, divide."  Thus, one possible definition of science is the process of cutting, dividing, separating truth from error, and knowing.

"When a baby is born," Elder Russell M. Nelson recently asserted, "the umbilical cord is doubly ligated and severed between those two ligatures. A ligature is a tie—a secure tie. The word religion comes from Latin roots: re, meaning 'again' or 'back to,' and likely ligare, meaning 'to tie' or 'to ligate.' Thus, we understand that religion 'ties believers to God.'" (Let Your Faith Show)

In other words, we need to know what science and religion actually are before we can postulate that they are two completely irreconcilable things.
Posted by John Hancock at 6:27 PM