"Now ye may suppose that this is foolishness in me; but behold I say unto you, that by small and simple things are great things brought to pass; and small means in many instances doth confound the wise." (Alma 37:6)

"We can do no great things, only small things with great love." - Mother Teresa 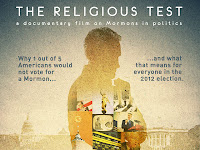 Tonight I attended the screening of a documentary film called The Religious Test, a film that explores various opinions concerning Mitt Romney's path toward the presidency and the nature of what has recently come to be known as the "Mormon Moment".  Trevor Hill, the creator of the film, embarked on a personal quest to understand why, according to one poll, 1 in 5 people in the United States would refuse to vote for a Mormon President.  Trevor, who describes himself as an expert in neither religion nor politics, has constructed a thought provoking film that incorporates a wide variety of religious and political perspectives.  The film is commendable for the manner in which it seeks to open up a broader discussion of Mormonism to the general public, as well as for the questions it raises for Mormons themselves.

After the screening, Professors Ralph Hancock, Terryl Givens (author of the new book, The God who Weeps) and his wife Fiona Givens commented on the film and asked questions to generate a discussion.  I would like to touch briefly on the content of the film and the discussion, and use this as a springboard to articulate some of my own ideas and questions about Mormonism and the so-called "Mormon Moment".  I must confess from the outset that I am a biased observer of the film, not only because I am a Mormon, but because the filmmaker's sister is married to one of my brothers, and one of my sisters helped edit the film.  Thus, I am promoting the film itself as well as the kind of civil dialogue that the film engenders.

The Religious Test directs questions about Mormonism to a variety of audiences and observers, to Mormons of varying opinions, to non-religious observers, and to members of other faiths.  The documentary raises questions about Mormon beliefs and practices, Mitt Romney's campaign, polygamy, blacks and the priesthood, homosexuality, and other topics.  The stated purpose of the film is to "inform viewers about perceptions and misconceptions regarding Mormon faith and culture" while avoiding "dogmatic discussions" or seeking to "promote any belief system".

The discussion following the film focused in on the role of Mormonism in a pluralistic society, Mormon peculiarity, and why some people may experience trepidation with regards to religion in general and Mormonism in particular.  After some reflection on the content of the documentary and the ensuing discussion, I have come to the conclusion that this "Mormon Moment" may simply be a peculiar facet of a "Christian Moment" embedded in the larger diamond of Christian history, or History, which is itself only a small jewel in treasure trove of eternity.

Mormons are fond of speaking of life on earth as a brief moment, where the entire history of mankind amounts to what is less than the blink of an eye in the eternal scheme of things.  With this perspective in mind, in the past few decades mini Mormon Moments have quickly come and gone.  It could be said that the Mormon Moment actually began in the Spring of 1820, when Joseph Smith saw God and Jesus Christ and not long thereafter was called to establish the Church of Jesus Christ of Latter-day Saints.  A decade later, the Book of Mormon was published, and since that time the Mormon Moment, broadly defined, has spread over nearly two centuries.  But two centuries is a very brief amount of time when compared to the history of the earth and of Christianity, and as noted above, even this later history is itself but a blip on eternity's screen. 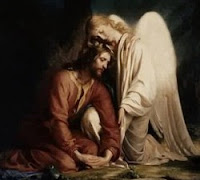 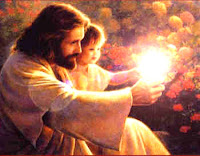 With this question in mind, Hill's documentary The Religious Test facilitates a discussion not only about Mormonism and the Mormon Moment, but about Christianity and Jesus Christ.  Jesus Christ's mortal life was brief, but it was the greatest Christian moment because of the way that he lived.  Every moment of his life was a Christian moment, given willingly and lovingly in the service of God and of mankind: "For God so loved the world, that he gave his only begotten Son, that whosever believeth in him should not perish, but have everlasting life" (John 3:16)

To an infinitesimally smaller degree and because of Jesus Christ, each human life is graced with Christian moments, moments that reflect the love, the kindness, the meekness and submission of the Savior.  God created man and woman, his sons and daughters, not only in his image but also in his likeness, which is to say that each human being carries within himself or herself a portion of divinity that finds expression in little Christian moments... a kind word, a listening ear, an anonymous act of service, a trespass forgiven, a warm embrace, a loving smile, or an expression of gratitude.  The cumulative effect of these little Christian moments, whether evidenced in the lives of Christians or of those of other faiths, is what constitutes a true Christian moment, and what should constitute this mini Mormon Moment as well as the broader Mormon Moment of the last couple of centuries.
Posted by John Hancock at 12:52 AM