What is the relationship between reason and revelation?  This is an age-old question, often symbolized by the question, "What has Athens to do with Jerusalem?"  I often find more answers to this question in music, art, history and literature than I do in philosophical treatises.  Dante's entire Divina Commedia, for example, could be read as a response to this question. Another response can be found in Shakespeare's Two Gentlemen of Verona, when Julia is pining after Proteus, Lucetta tries to comfort her:


"I do not seek to quench your love's hot fire,
But qualify the fire's extreme rage,
Lest it should burn above the bounds of reason." (Act 2, Scene 7)

Lucetta's words do little to assuage the burning desire... in fact, it has the opposite effect on Julia:


"But truer stars did govern Proteus' birth
His words are bonds, his oaths are oracles,
His love sincere, his thoughts immaculate,
His tears pure messengers sent from his heart,
His heart as far from fraud as heaven from earth."

By philosophical standards, these words could be read as those of a mad-woman, speaking words "above the bounds of reason" because of the love that she feels.  Yet, Julia's description of Proteus' goodness are so reasonable that they resonate with the historically significant words of one who, Proteus-like, approached his impending martyrdom with other-worldly serenity:

"I am going like a lamb to the slaughter," said Joseph Smith to the company that was with him at the time of his arrest, "but I am calm as a summer's morning. I have a conscience void of offense towards God, and towards all men. I shall die innocent, and it shall yet be said of me. 'He was murdered in cold blood'" (D&C 135:4).

Joseph Smith understood and lived the revelation to "Love your enemies, bless them that curse you, do good to them that hate you, and pray for them which despitefully use you, and persecute you" (Matt 5:44).

Whether in philosophy, literature or history, much ink has been spilt that is relevant to the subject of reason and revelation, and quite a bit of paint (such as that of the Renaissance artist Raphael) has been applied to canvases as well: 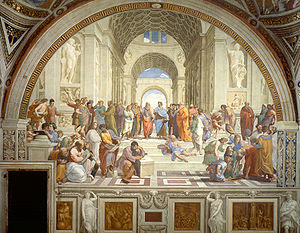 But perhaps nothing answers the question "What is the relationship between reason and revelation?" better than music (although I like the sculpture of Cupid and Psyche in the Louvre), such as a song that is reminiscent of a gondolier's rhythmic stroke through Venetian waters like the Barcarolle from Offenbach's Les Contes d'Hoffmann.