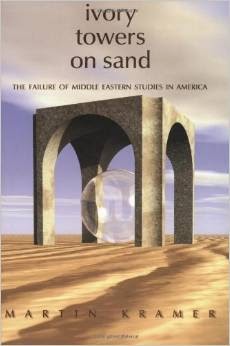 After the tragic events of September 11, 2001 Americans were inundated with reports from Middle East "experts" and analysts.  As Martin Kramer argues in his book Ivory Towers on Sand, many of these "expert" voices were misguided because of ideologies that pervade the field of Middle Eastern studies.

In the preface to Ivory Towers on Sand, Fred S. Lafer and Michael Stein point out the basic problem that Kramer confronts in his book:

"America is ill served by the way in which the Middle East is studied and presented at institutions of higher education across the nation.  The academic understanding of the Middle East is framed not by the realities of the region, but by the fads and fashions that have swept through the disciplines... Looking back, it is clear that the Middle East has completely defied the paradigms that have dominated the field of Middle Eastern studies.  Americans who have followed the Pied Piper of the academy have been surprised time and again by the real Middle East."

As Kramer indicates in the introduction to Ivory Towers on Sand, the purpose of his book is to "probe how and why a branch of academe once regarded with esteem has descended to such a low point in the public estimate, and what might be done about it."  Kramer was inspired early on in his studies by Elie Kedourie's essay "The Chatham House Version," and his direct intellectual influences include Fouad Ajami and Bernard Lewis.  As an American-Israeli scholar of the Middle East, Islam, and Arab politics it can hardly be claimed that Kramer is without biases of his own, but his perspectives provide an effective counter-balance to deeply entrenched biases in the field of Middle Eastern studies.

Gradually American advocates of Middle Eastern studies courted the social sciences, acquiring along the way a host of popular paradigms and enchanting theories.  In this way, Kramer relates, researchers in the field "would become more than scholars: they would become experts."  The development of Middle Eastern studies in America depended upon strategic views of the region, the prestige of social science, independent Middle East centers, academic homesteading, and coordination across a wide geographic area (thus the establishment of MESA, the Middle East Studies Association of North America in 1966).

Perhaps most importantly, however, the proliferation of Middle Eastern studies programs in America depended upon leadership, or as Kramer puts it, center directors with "both academic credibility and public visibility," such as the Lebanese-born historian Philip Hitti (and others such as Aziz Atiya, Majid Khadduri and Farhat Ziadeh).  These and other leaders learned how to "frame their appeals in political terms that made sense to their fellow Americans."  Soon Middle Eastern studies became more than an "academic field to be explored," but a "message to be preached" :

"Middle Eastern studies came under a take-no-prisoners assault, which rejected the idea of objective standards, disguised the vice of politicization as the virtue of commitment, and replaced proficiency with ideology.  The text that inspired the movement was entitled Orientalism, and the revolution it unleashed has crippled Middle Eastern studies to this day."

Kramer, like many of his predecessors, is unrelenting in his criticism of Edward Said's Orientalism. He devotes much of the remaining chapters in Ivory Towers on Sand to understanding and exposing the revolution that Said's book unleashed.  "The tragedy of Mr. Said's Orientalism," wrote Bernard Lewis, "is that it takes a genuine problem of real importance and reduces it to the level of political polemic and personal abuse."

One of the major problems with Edward Said's Orientalism, according to Kramer, was not only that it failed to predict Islamism, but that Islamists appropriated his work for their own ends.  A later don of Middle Eastern studies, John L. Esposito, was also complicit in distorting perceptions of the Middle East:

"Academics blinded by the paradigms of Said and Esposito continued to be surprised not only by America, where they lived, but by the Middle East, which they studied."

Toward the conclusion of his book Ivory Towers on Sand, Martin Kramer calls for reform in the field of Middle Eastern studies, hoping specifically for internal regeneration:

"As in the past, so this time, it is generational change that will renew and reinvigorate the field.  The mission will probably be accomplished by people who are under forty, who are not implicated in the excesses of the recent past, and who understand how perilously close to the precipice they have been led.  Their task will be a formidable one... The breakthroughs will come from individual scholars, often laboring on the margins.  As the dominant paradigms grow ever more elaborate, inefficient, and insufficient, they will begin to shift.  There will be more confessions by senior scholars, and more defections by their young protégés."

"It will take years," Kramer concludes, "for Middle Eastern studies to restore its reputation for credibility and relevance.  But for better or for worse, the Middle East provides frequent opportunities for its interpreters to test and prove themselves.  It is not too late to begin anew."
Posted by John Hancock at 4:53 PM