What is True Love? : A Meditation on Jane Austen and Courtship 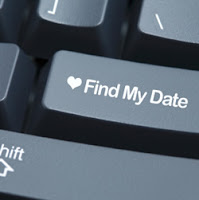 It may come as no surprise that more and more people, especially women, are lamenting the end of courtship.  While this is undoubtedly a great cause for concern, not just for those who are meandering through the mazes of modern relationships, but also for future generations, there is still reason for hope.  Staggering statistics that point to the end of traditional dating, declining birth rates, and increasing millennial misery cannot stand in the way of a timeless and successful romance.  Perhaps the truth lies somewhere between the glum media forecasts and the starry-eyed optimism of youth, but one thing is certain, the ideal of true love must be upheld if it is ever to be achieved.

What is love?  What is true love?  These are questions that are too seldom asked and too rarely answered.  Lest we suppose that only young people do not understand what love is, let us recall Tevya's profound question to his wife Golde: "Do you love me?"  One might also consider Julia and Lucetta's exchange over Proteus in Shakespeare's Two Gentlemen of Verona (Act I, Scene II):


His little speaking shows his love but small.


Fire that's closest kept burns most of all.


They do not love that do not show their love.

O, they love least that let men know their love.

These are, of course, two very different, though not entirely unrelated, artistic expressions of the meaning of love (see here for a beautiful operatic expression of this theme from Puccini's Quando me'n vo, or here for the great Buddy Holly song True Love Ways).  But if the Shakespeare's and Sholem Aleichem's of the world are disappearing just as quickly as traditional courtship and marriage, how long can true love survive?  If the New York Times has declared the end of courtship, who am I to say that we are not doomed?

Fortunately, the Bible ("Charity never faileth"), Shakespeare ("Love's not Time's fool") and even The Princess Bride ("True love") all remind us that true love is actually the only thing that will survive.  When the New York Times and all other news sources are consigned to the ash heap of history, true love will be found burning brightly.

But there is one slight problem here.  All of the examples cited above have been borrowed from male authors.  While there is nothing inherently wrong with the perspectives of a male apostle, a male playwright, or male authors, a panegyric to true love would be incomplete at best without at least drawing upon the perspectives of the fairer sex.  To that end, let us commence by probing the mind of one last author and guardian of true love, namely Jane Austen. 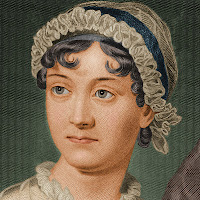 Although she never married, Jane Austen not only understood true love, but she was able to articulate the effects of true love (such as courtship and chivalry) with great precision and eloquence.  For example, her world famous novel Pride and Prejudice (200 years old this year, see also here) begins with these unforgettable lines:

"It is a truth universally acknowledged, that a single man in possession of a good fortune must be in want of a wife.  However little known the feelings or views of such a man may be on his first entering a neighbourhood, this truth is so well fixed in the minds of the surrounding families, that he is considered as the rightful property of some one or other of their daughters." 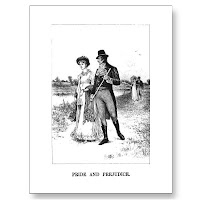 This introduction paves the way toward a tale of love and courtship that has captured the imaginations of untold numbers of readers, even though the author originally intended for her writing to remain a secret.  What is perhaps most astounding however is that Jane Austen wrote Pride and Prejudice when she was only 21 years old.  How could a girl so young, with such a bucolic background, write such penetrating, persuasive and evocative fiction? What did she understand so deeply and so well that enabled her to compose such works as shall stand the test of time?  J.K. Rowling, Suzanne Collins and Stephanie Meyer may fade into oblivion, but future generations will still remember Jane Austen.

If I am not mistaken, Jane Austen not only survives, but thrives, because she upheld the ideal of true love with both humor and grace.  Moreover, she was not tainted by post-modern distortions of gender roles or warped ideas about sexuality.  Certainly her era was vexed with other problems, such as wars and revolutions, but complementarity, rather than competition between the sexes, was characteristic of her thought and of her expression.

As a short tribute to such a precocious, prodigious and prolific person of letters (and less directly as a tribute to the enduring ideal of true love), here follow a few of my favorite quotations from Jane Austen's novel Pride and Prejudice:

"There are few people whom I really love, and still fewer of whom I think well. The more I see of the world, the more am I dissatisfied with it; and every day confirms my belief of the inconsistency of all human characters, and of the little dependence that can be placed on the appearance of either merit or sense." -Elizabeth to her dear sister Jane, Volume II, Chapter I

"I shall not say that you are mistaken,'' he replied, "because you could not really believe me to entertain any design of alarming you; and I have had the pleasure of your acquaintance long enough to know, that you find great enjoyment in occasionally professing opinions which, in fact, are not your own.'' - Darcy to Elizabeth, Chapter VIII

"Upon my word," said her Ladyship, "you give your opinion very decidedly for so young a person. Pray, what is your age?" / "With three younger sisters grown up," replied Elizabeth smiling, "your Ladyship can hardly expect me to own it." - Elizabeth replies to Lady Catherine, Volume II, Chapter VI

"More than once did Elizabeth, in her ramble within the park, unexpectedly meet Mr. Darcy." -Volume II, Chapter X

"In vain I have struggled. It will not do. My feelings will not be repressed. You must allow me to tell you how ardently I admire and love you." - Darcy to Elizabeth, Volume II, Ch. XI

"... I shall endeavor to find some opportunity of putting this letter in your hands in the course of the morning. I will only add, God bless you." -a letter from Fitzwilliam Darcy to Elizabeth

"Elizabeth was delighted. She had never seen a place for which nature had done more, or where natural beauty had been so little counteracted by awkward taste. They were all of them warm in their admiration; and at that moment she felt that to be mistress of Pemberley might be something!" - Volume III, Chapter I

"Elizabeth answered only by a slight bow. Her thoughts were instantly driven back to the time when Mr. Bingley's name had been last mentioned between them; and if she might judge from his complexion, his mind was not very differently engaged." - Volume III, Chapter I

"But above all, above respect and esteem, there was a motive within her of good-will which could not be overlooked. It was a gratitude;- gratitude , not merely for having once loved her, but for loving her still well enough to forgive all the petulance and acrimony of her manner in rejecting him, and all the unjust accusations accompanying her rejection." - Elizabeth Bennet's noble thoughts toward Mr. Darcy

" 'Yes' replied Darcy, who could contain himself no longer, "but that was only when I first knew her; for it is many months since I have considered her as one of the handsomest women of my acquaintance."- Mr. Darcy describes his feelings toward Elizabeth to Miss Bingley

"This is a most unfortunate affair, and will probably be much talked of. But we must stem the tide of malice, and pour into the wounded bosoms of each other the balm of sisterly consolation." - Mary to Elizabeth

"Balls will be absolutely prohibited, unless you stand up with one of your sisters. And you are never to stir out of doors, till you can prove that you have spent ten minutes of every day in a rational manner... Well, well... do not make yourself unhappy. If you are a good girl for the next ten years, I will take you to a review at the end of them." - Mr. Bennet to his daughter Kitty

"I thank you for my share of the favour," said Elizabeth; "but I do not particularly like your way of getting husbands." - Elizabeth to her sister Lydia

"He could be still amiable, still pleasing to my uncle and aunt, when he was in town; and why not to me? If he fears me, why come hither? If he no longer cares for me, why silent? Teasing, teasing man! I will think no more about him." - Elizabeth frets about Mr. Darcy

"For what do we live, but to make sport for our neighbors, and laugh at them in our turn?" - Mr. Bennet

"The happiness which this reply produced was such as he had probably never felt before; and he expressed himself on the occasion as sensibly and as warmly as a man violently in love can be supposed to do." - Mr. Darcy's reaction to Elizabeth's change of heart

"We will not quarrel for the greater share of blame annexed to that evening," said Elizabeth. "The conduct of neither, if strictly examined, will be irreproachable; but since then we have both, I hope, improved in civility." - Elizabeth to Mr. Darcy

"You showed me how insufficient were all my pretensions to please a woman worthy of being pleased." - Mr. Darcy's apology to Elizabeth

"Now, be sincere; did you admire me for my impertinence?"
"For the liveliness of your mind I did." - Darcy replies to Lizzy
Posted by John Hancock at 10:42 PM