Must you really love your enemies to be a true disciple of Christ?  In the documentary film Unresolvable? The Kingdom of God on Earth, Mormon filmmaker Brian Hall braves protestors and the Bible Belt to find answers to this question.  With a variety of passionate interlocutors, including Pastor Robert Jeffress, Hall explores the question of what it means to be a Christian. 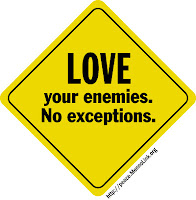 Hall appeals to the mercy of Christianity while attempting to reason with his fellow citizens of the United States, some of whom see him as a potential enemy.  Besides confronting Jeffress and anti-Mormon protestor Ruben Israel, Hall engages in dialogue with various evangelical preachers.  He also juxtaposes John F. Kennedy's position as a Catholic presidential candidate to Mitt Romney's position as a Mormon presidential candidate.  In what is perhaps the most edifying and enlightening conversation of the entire film, Hall interviews a young lady who defines Christianity according to the parable of the good Samaritan.

The documentary begins with a clip from the Colbert Report and a disclaimer that the filmmaker is just an average Mormon (not one of the people that might be found in the "I'm a Mormon" advertisements).  Throughout the interviews, Hall is sincere about his feelings toward religious rivals and his hatred of their vitriolic speech.  The individuals that Hall interviews are likewise sincere about their feelings toward Mormons and people of other faiths, particularly Muslims.

Unresolvable? The Kingdom of God on Earth provides interesting perspectives on what it means to be a Christian and what it means to love your enemies.  The documentary succeeds in raising these questions, but perhaps more importantly it gives rise to other questions that sooner or later every Christian needs to ask himself or herself, namely, "What thinks Christ of Me?" and "What must I do to become a more Christian Christian?"